You are here:
March 20, 2014Leave a commentConsultations, Internet GovernanceBy wp-admin In order to raise awareness about online safety, Google India initiated a nationwide campaign, ‘Good to Know’. The campaign focuses at ensuring that Internet users act as responsible digital citizens.  This nationwide campaign started on 11 February 2014, which is also celebrated as Internet Safer Day. The campaign was launched by Google India with support of its partners, Digital Empowerment Foundation (DEF) and the Voluntary Organization in the Interest of Consumer Education (VOICE). Voluntary Organization In Interest of Consumer Education-is a voluntary action group. The objective of the organisation is to secure and promote the interests of consumers. The forum aims at making consumers conscious of the malpractices which exist in the market and ways to overcome them. 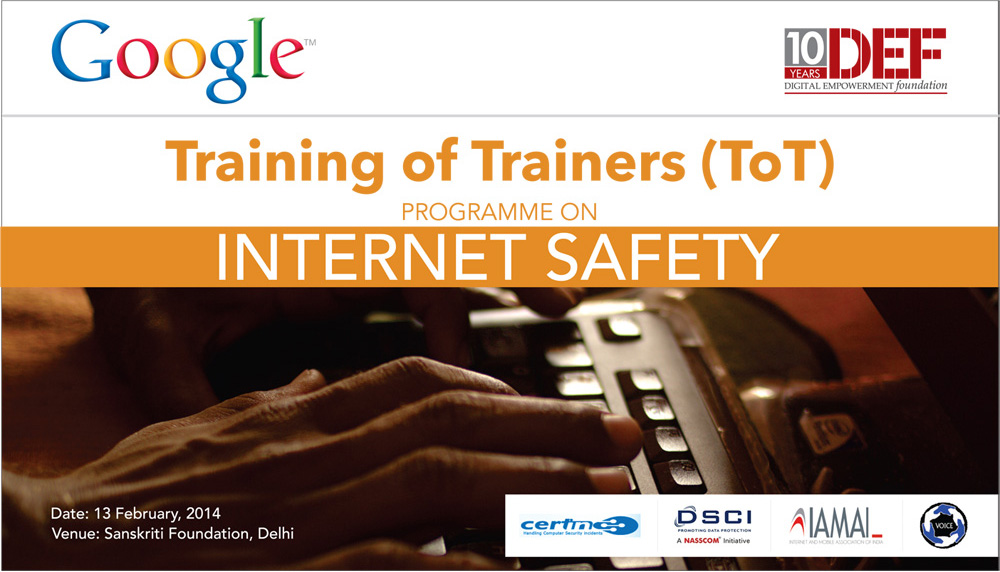 A Government – mandated organization, Computer Emergency Response Team (CERT-In), endorsed the campaign. CERT-In is an information technology (IT) security organization. The team works on responding to computer security incidents, reporting on vulnerabilities and promoting effective IT security practices nationwide. Among other endorsers was Data Security Council of India (DSCI), which focuses on creating trust for Indian companies as global sourcing service providers. It looks at assuring clients all over the world that India is a secure destination for outsourcing. It lays emphasis on the fact that privacy and protection of consumer data is amongst the basic ethics followed by companies in India. Another endorser of the campaign was the Internet & Mobile Association of India (IAMAI). The Association is a not – for – profit industry body which aims at expanding and enhancing online as well as mobile value added services sector.  It tries to present a united voice of its business representation to the Government, consumers, investors and stakeholders.

As part of this campaign, Google India and DEF have initiated a nationwide programme, ‘Digital Literacy, Safety & Security’. It aims at imparting digital literacy in order to ensure user protection and promote ways and means for users to stay safe online. It works towards advocating digital security and privacy needs through ‘Digital Literacy, Safety & Security’ workshops in different states of India.The first level of Training of Trainers’ (ToT), on ‘Internet Safety’ was organized on 13th Feb 2013 at Sanskriti Foundation, New Delhi. Through this training programme we looked at creating grassroots-level of trainers who can now impart their understanding of online safety to their peers. The programme represented participants from Delhi, Baran, Guna, Lucknow, Kanpur, Meghalaya, Alwar, Guwahati, and Pune. These trainers will further engage with e school staff members, teachers, students, NGOs’ staff members, etc.

It is fascinating that the power of Internet is not only limited to the literates and elites but is also catching the fancy of illiterate and ordinary rural Indians. The people at grassroots are welcoming newly discovered power of Internet and trying to explore the medium as much as they can irrespective of their literacy levels, age, gender etc.  The emergence of Internet has set to motion a dynamic process, which has the potential to bring an extra ordinary change in our society. Through this medium we are trying to support the rural Indians to walk towards a more informed, empowered and connected future.

Related posts
Right to Access the Internet: Upholding a Human Right
April 2, 2015
“Not Too Inaccessible for Broadband: Connecting Remote Communities with Wireless Spectrum”
April 2, 2015
Digital strategies for disaster management: Lessons from Kashmir
September 18, 2014
When it comes to internet governance, India is still engaging actively with the UN
August 7, 2014
www.whatsinaname.icann
July 11, 2014
A digital inclusion vision for next government
May 12, 2014
Leave Comment