Initiated by: The Energy and Resources Institute (TERI), Uttarakhand

About the project: Kumaon Vani is a community radio station set up by TERI in Mukteshwar in Nainital district of Uttarakhand. Located at an altitude of more than 2286 m, it reaches out to nearly 500 villages in Nainital, Bhimtal, Almora, Ranikhet, Champawat, Devidhura, Pithoragarh, Betalghat, Sheetlakhet, Kausani, Gwaldham and Bagheshwar. Kumao Vani also uses IVR and mobile technologies to reach wider population with phone-in facility also. 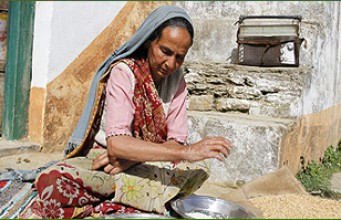 Kumaon Vani is operated, owned and driven by the local communities in Mukteshwar. The main agenda of Kumaon Vani is growth and development of Kumaon region by promoting knowledge and information on agriculture, horticulture, social issues and governance. ‘Kumaon Vani’ is among the 150 functional community radio stations in the country that have been granted license by the Ministry of Information and Broadcasting, Government of India. It covers a population of nearly 200,000 people, which is pre-dominantly an agricultural community. It has a feature called Mobile Vani, which is an IVR system (Interactive Voice Response) that al-lows people to call into a number and leave a message about their community, or listen to messages left by others.

The radio also discusses social problems in the community like bringing together people against domestic violence, generating awareness about environmental conservation etc. There is increasing participation by women in studio programmes, live interviews and phone-ins. They are voicing their opinions more readily than before on issues affecting their welfare. Children are given simple lessons on health and hygiene in an entertaining way through programmes like “Galli Galli Sim Sim”. The local youth have been able to take advantage of the information being given about em-ployment opportunities in organisations like ITBP etc.

Scope of case study:  KV programme is broadcasted among Kumaoni community based in Nainital, Champawat, Almora, Bageshwar, Chamoli, Ranikhet and parts of Pithoragarh. Kumaon Vani has attempted to reach out to the Kumaoni community at large by reconnecting them to Kumaoni language, music and culture.

Value proposition:  Kumaon Vani has paid special attention to improving the quality of its programmes and is gradually moving towards a technique called Community Learning Programme or CLP developed by Commonwealth of Learning. The CLP involves participatory assessment – where the radio team and the local community together decide upon one issue that is pertinent to the community and something which the community needs to know more about. They together identify negative and positive behaviours associated with the issue and its sub-issues.

Learning from the Project : The collective voice of the people on the radio has helped to improve local governance in several spheres, most significantly in improving the delivery of public distribution system in the neighboring villages.

I can flip through 100 channels on TV, and yet find nothing that concerns my daily life. Kumaon Vani talks about my life and my problem. — Khushhal Singh, Sunkiya village

We are certified artists from Akashvani in Almora. But we don’t get a chance to sing there. Kumaon Vani has given us an opportunity to take our talent to the people. — Tara Singh, Lodh village

The programme English Vinglish is very useful for our children. Please run it longer and also share CDs with us if possible. — Radha Ballabh, Sonedha village

Please broadcast after 6 in the evening, when we are back home. We can relax and tune in to Kumaon Vani without any distraction. –Tara Singh Dangwal, Sunkiya village

I ran around for many years to get an electricity connection. When I shared my problem on Kumaon Vani, I was immediately given a connection under the Rajiv Gandhi Vidyutikaran Yojana. — Bhawna Bisht, Katramal village

I want to request Kumaon Vani to give information on the current selling price of various crops in the local mandis through their programme Kheti Baadi. — Ganga Singh Bisht, Prabada

internet rights
About the author