Protests in New Delhi, December 22nd and 23rd, 2012Slogans like ‘Don’t stop your daughter from going out. Teach your son how to behave’ has evoked thousands to take their anger and outrage to the streets after the brutal incident of a 23-year-old girl, who was gang-raped on a moving bus on the night of December 16, 2012 in Delhi. 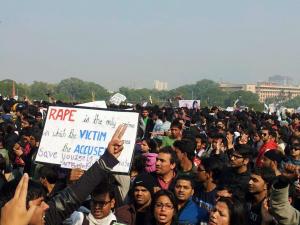 The protests that have erupted in Delhi against rape and sexual assault cases are reverberating across media, including print, electronic and social media. The attention from media is always important in such caused-based movements in a country like India, where the number of rapes shot up by a flabbergasting 873 percent between 1953 and 2011, according to CPI-M’s ‘People’s Democracy’ latest edition. Between 2007 and 2011, rape incidents increased by 9.7 percent in the country – Delhi saw 2,620 rape cases during that period, while Mumbai had 1,033, Bangalore 383, Chennai 293 and Kolkata 200 cases. However, the struggle and movement against such criminal acts, is not the first time in India. Two years, before, in 2010, media played vital role in bringing out the truth behind Jessica Lal’s case.