Initiated by: Association for Democratic Reforms

MyNeta.info is an initiative of the Association for Democratic Reforms (ADR), a nonprofit organization that aims to disclose the criminal, financial and education background of the candidates contesting elections. Along with ADR, the National Election Watch has continuously conducted a survey and conducted Election Watches for the 2004 and 2009 Lok Sabha Elections, Rajya Sabha Elections and almost all State Assembly Elections post 2003 in the country. 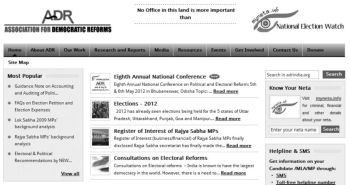 Besides keeping an eye on electoral candidates, ADR also analyzes political parties function as they play major role between people and their representatives, and thus, in their structure and working, they must adhere to democratic norms and transparency.