The ‘Stop Honor Killings in India’ blog is the International Campaign Against Honour Killing, a project started by Diana Nammi Director and Founder of London-based charity IKWRO that provides support and protection to women faced with ‘with ‘honour’-based violence and forced marriage. 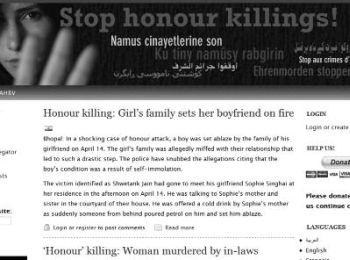 The blog shares views and opinions against the honor killings in India sanctioned by the Khap Pamchayats. The blog protest against the practice which not clearly presents a case of extreme violation of basic human rights of the couple affected but is also condemnable in the light of India’s constitution. Khap panchayats pronounce death penalties for the youths who dare to enter in a relationship outside their caste/creed/religious and economic circle. The blog also points out that no law in the Indian democracy has been enacted against the regional caste Panchayats who pass such ‘judgments’ which represents a stark human right violation.