About the project: Women’s Organization for Social Cultural Awareness (WOSCA) created a mobile-based monitoring system – Tracking Entitlements for Rural Communities (TERComs) – that tracks the accuracy of important social protection delivery services entitled to the poor. The system aims to monitor three major social protection schemes: the National Rural Employment Generation Scheme (NREGS), PDS and Pension. Through mobile communication, TERComs attempts to improve the impartial system for those who may be excluded from the benefits and ensure they receive their due benefits. 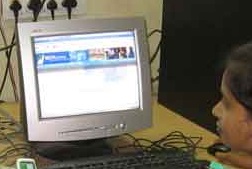 The system depends on the work of volunteers who track the activities in the villages. They use mobile devices to report the number of household members every month at the service delivery point in scheduled distribution dates. The project uses SMS or MMS to transfer information from the phone to a Management Information System (MIS) on a web application server. The server then generates reports based on the information received and also tracks various government schemes.

The reports are shared with government officials, elected representatives and village communities for full transparency. This also creates pressure, for more impartial measures. The instant information-sharing in rural communities promotes participation and helps ensure the legitimacy of the government system in which those who are in a disadvantaged situation can benefit from the services.

Till June 2012, the system had impacted 87,000 families, whose access to public services has increased.  More than 542 villages were made aware of such entitlement through sharing real-time information and 1,234 community organizations were able to access information and receive entitlement opportunities via TERComs.

Till May 2013, 334 people have claimed their wages due from block under MGNREGS. This was the highest in the district and already 123 cases have been accepted by government. This was due since last one year.

Scope of case study    Orissa, one of the poorest states in India, has a tribal population of 44.52%. Of these, 76.96% are Below Poverty Line (BPL) with a 44.73% literacy rate. Due to lack of information, many from this population are unaware of their rights to benefits from the public distribution system (PDS) and pension schemes. To improve the situation,

Value proposition: TERComms facilitates information on real time basis that minimizes service gaps between people and government benefiting both at the same time.

–   Rural poor are made aware on provisions of MGNREGA, PDS and Pensions and it builds up the voice of the marginalized people to ask district administration about the legitimate entitlements meant for the poor and taken away by creamy layers

–   Real time information has created a community debate among community people which ultimately helped poor people in raising the voice before public officials.

–   A citizen tracking mechanism has been established at villages and senior members of village and religious leaders are keeping one agenda in their meetings how to get benefit for poor from government schemes.

Learning from the Project    More and more families are receiving suitable employment and earning appropriate wages; the poor, the elderly, and the socially excluded are receiving proper entitlement to governmental services and are no longer excluded from the BPL list.

Finally, the government has seized 4,854 fake PDS cards and many more are waiting to be revealed.

During first quarter, 2013, there are 673 bogus cards found and out of those 97 have been seized by Panchayats after getting the information from WOSCA. 331 job cards returned back to entitlement holders. These cards were kept with contractors illegally. Rs 28.4 lakhs of public money being saved through seizing bogus cards and more than 4300 person days being generated after return back of job cards.

Issues & Challenges:  The main challenge TERComms faced was in handling software by the project staff and operating mobile by the village volunteers.